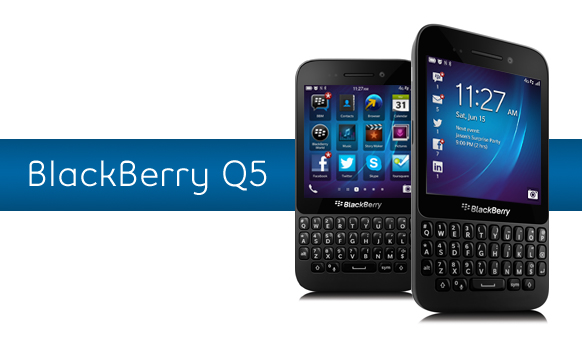 To the legions of BlackBerry loyalists out there – and despite what you may have heard there are still over 70 million of them worldwide – the keyboard was, is and always will be one of their favourite things.

Although the company has indicated that its strategy is to now focus on enterprise and prosumer customers, the Q5 holds an interesting appeal to a wide range of potential buyers who value simplicity and a relatively low price. For consumers looking to replace an older BlackBerry, the Q5 is the logical follow-on. For companies looking to hold the line on deployment costs to employees without compromising training, setup or support, the Q5 is a similarly balanced alternative.

Compared to the Q10’s keyboard, which sports individual, full-travel keys and metallic frets between the rows like classic, higher-end BlackBerrys have always had, the Q5’s membrane-type affair is a little less refined. Like the Q10, it’s backlit, and it works well enough. But the way adjacent keys seem to flex a bit as you type makes this the most obvious place where costs were cut.

BlackBerry didn’t cut down on the memory, though, which like its big Q10 brother is a generous 2 Gb. Likewise, it has the same micro-SD card slot (to boost the onboard 8 Gb of storage by up to another 32 Gb) and 3.1-inch, 720×720-pixel touchscreen as the Q10. While it’s an IPS panel instead of the Q10’s Super AMOLED screen, most users will hardly notice the difference in everyday use.

An interesting design decision actually makes the Q5 a little more usable than its higher-end big brother: the company’s decision to put the BlackBerry logo between the keyboard and the screen actually gives your finger more room to make the all-important swipe-up maneuver than on the Q10, whose screen starts immediately on top of the keyboard. The Q5’s 1.2 GHz dual-core Snapdragon S4 processor won’t ignite all-night mobile gaming sessions, but that was never the goal of this particular phone, anyway.

You won’t be pulling the battery to reboot the device because the battery is non-removable. But BB10 is a solid enough operating system that I haven’t had to reboot it yet. The battery itself is more than enough to keep the device alive for a full day of moderate-to-heavy use. By the time I found the wall charger most nights before my own midnight tuck-in, I typically had between 20 and 25 per cent charge remaining. Beyond the numbers, the Q5’s hardware is more than enough to keep things moving smoothly, with no lag at all.

If you’re transitioning off of an earlier BlackBerry, the first thing you’ll notice when you unbox the Q5 is the fact that it no longer has dedicated menu buttons between the keyboard and the screen. Likewise, the touch-sensitive directional “mouse” is no longer there. The BlackBerry 10 operating system replaces them with an all-touch interface that after a bit of adjustment, quickly becomes second nature. The bonus: more room for the screen. If colour moves you, the Q5 is available in either black, silver and red. If you’re still not sure which phone is right for you, you can read this post on 3 other smartphones worth considering for your business or connect with an expert to discuss your options.

The bottom line
Compared to the latest feature-packed phones that run either iOS or Android, the Q5 seems content to live in the more affordable shadows of its larger, more powerful competitors. But for the majority of Canadians, the Q5’s lower cost of entry and uncompromised day-to-day performance make it an easy-to-justify choice for cost-conscious consumers and businesses alike.