Posted August 16, 2017 in Careers, Inside Bell by Jordan Beresford 0

Before qualifying for the 2016 Rio Olympic Games, Joseph Polossifakis faced a tremendous decision – go “all in” and train for the Olympics or start his career with the Graduate Leadership Program at Bell. It was only after being accepted for the program, that he realized that he owed it to himself to pursue his dream of representing Canada at the 2016 Olympic Games in Rio de Janeiro, Brazil. Fast forward almost a year later: Bell held his spot and the Olympic sabre fencer is now a Bell.ca Marketing Specialist in Bell’s Graduate Leadership Program. We had the opportunity to sit down and chat with Joseph about his Olympic journey, what it’s like to be one of the best sabre fencers in the world, and why he chose Bell to start his career. 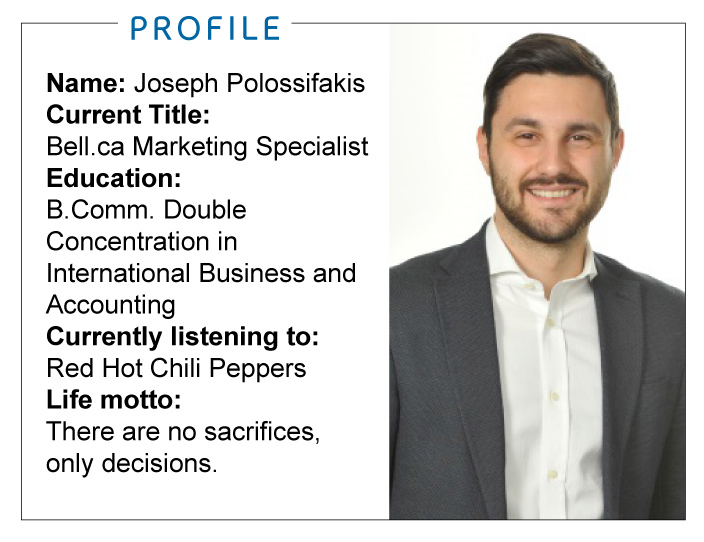 Bell: Tell us a bit about yourself.

Joseph Polossifakis: I’m an Olympic sabre fencer and I’ve been fencing for about 16 years. I first tried to qualify for the 2012 Olympics in London, but it didn’t work out. At the same time, I was working on my Bachelor of Commerce, with a double concentration in International Business and Accounting at McGill University, which took me about 5 years to complete due to training and competitions. In 2014, I received a job offer from Bell through the Graduate Leadership Program and it was at that moment that I realized I still wasn’t ready to give up on my dream of making the Olympics. I was very fortunate that Bell held my spot in the program. Two weeks after returning from Rio, I was working at call centre in Toronto. It’s been a bit of a transition for me, as I haven’t stopped fencing completely. Today, I’m on the Marketing Communications team working on Bell.ca.

Bell: What does an “average” day look like for you?

JP: I am lucky to live close to the Montréal campus. I wake up around 8 am, get ready and drive over to work. It’s a great feeling when you never have to deal with traffic!

At night, depending on the day, I’ll work out at the gym right here on campus. I also have fencing practice 2 or 3 times per week at the Olympic Stadium and I help younger kids who are aspiring fencers.

Before my life at Bell, I’d train for 2 hours in the morning then I’d attend classes at McGill. After class, I’d go back and train for 2 more hours. That was my schedule 5 days a week and on Saturday mornings. On top of that, I’d also travel to Europe for 6 weeks at a time. If you want to get better, you have to train with the Europeans. They’re powerhouses. As a result, I was gone to competitions and training camps most of the time. I missed a lot of school and I often had to make up exams, midterms, and group projects. 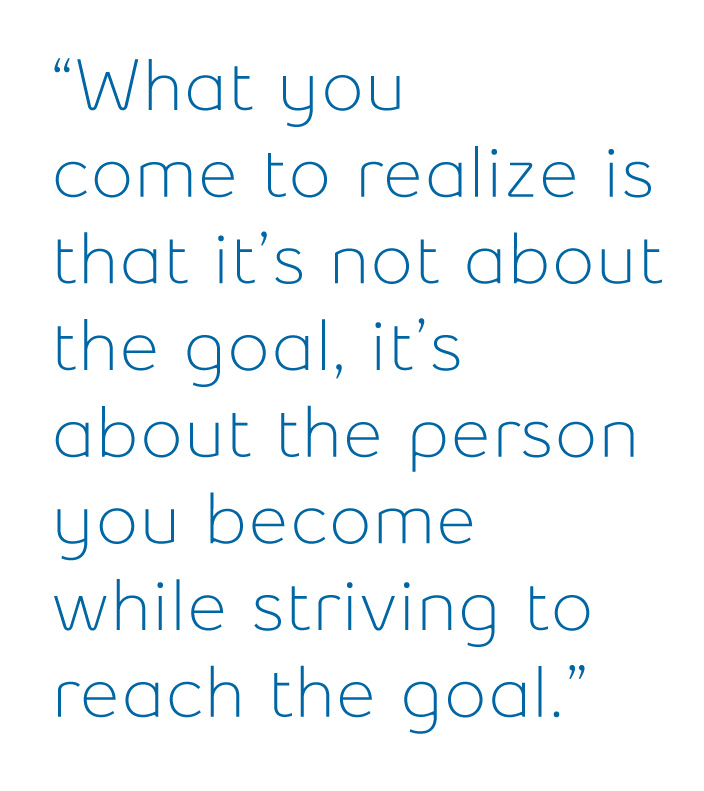 Bell: What made you decide to join the Graduate Leadership Program at Bell? And what did that process look like?

JP: While I was fencing, I had some sponsors and a salary, but it varied every year and there were no guarantees. On my way to Rio, I sustained a bad head injury and I was out for 5 months. Instead of training for Rio, I was in bed. I couldn’t go out, I couldn’t listen to music, I couldn’t sleep – and it ended up affecting my mental health. I lost my funding that year because I wasn’t ranked as one of the top 30 athletes in the world. It was very stressful because preparing for and attending the Olympics costs around $30,000. I ended up using everything I had saved, along with other contributions, to attend. I realized that I really didn’t like the uncertainty and I knew that with fencing it’s not something you can do forever. I knew I needed a plan B, which was to find a career.

What I liked about Bell’s Graduate Leadership Program was the flexibility. Because I was always training, I didn’t have a lot of work experience. The program offered flexibility, mentorship and support where you’re able to learn about yourself and take advantage of various opportunities within the organization.

The application process was a lot of work, but as soon as I got my offer I knew it wasn’t what I wanted, yet. Thankfully, Bell was willing to accommodate me and allowed me to defer my acceptance until after Rio. When they did this, they offered me a safety net. A lot of athletes don’t have that; they don’t have a plan B.

Bell: What are some of the skills you’ve developed in fencing that have been applicable in your career?

JP: Some of the most applicable skills are being able to deal with people, how to manage emotions, expectations, being able to persevere, and having determination. Fencing is a very strategic sport and as a result, I’m very good at understanding situations and reading people. You have to read your opponent, understand what’s going on around you, and adapt. It’s very cool because I can find ways to implement that knowledge here at Bell and use it to be a valuable team member. 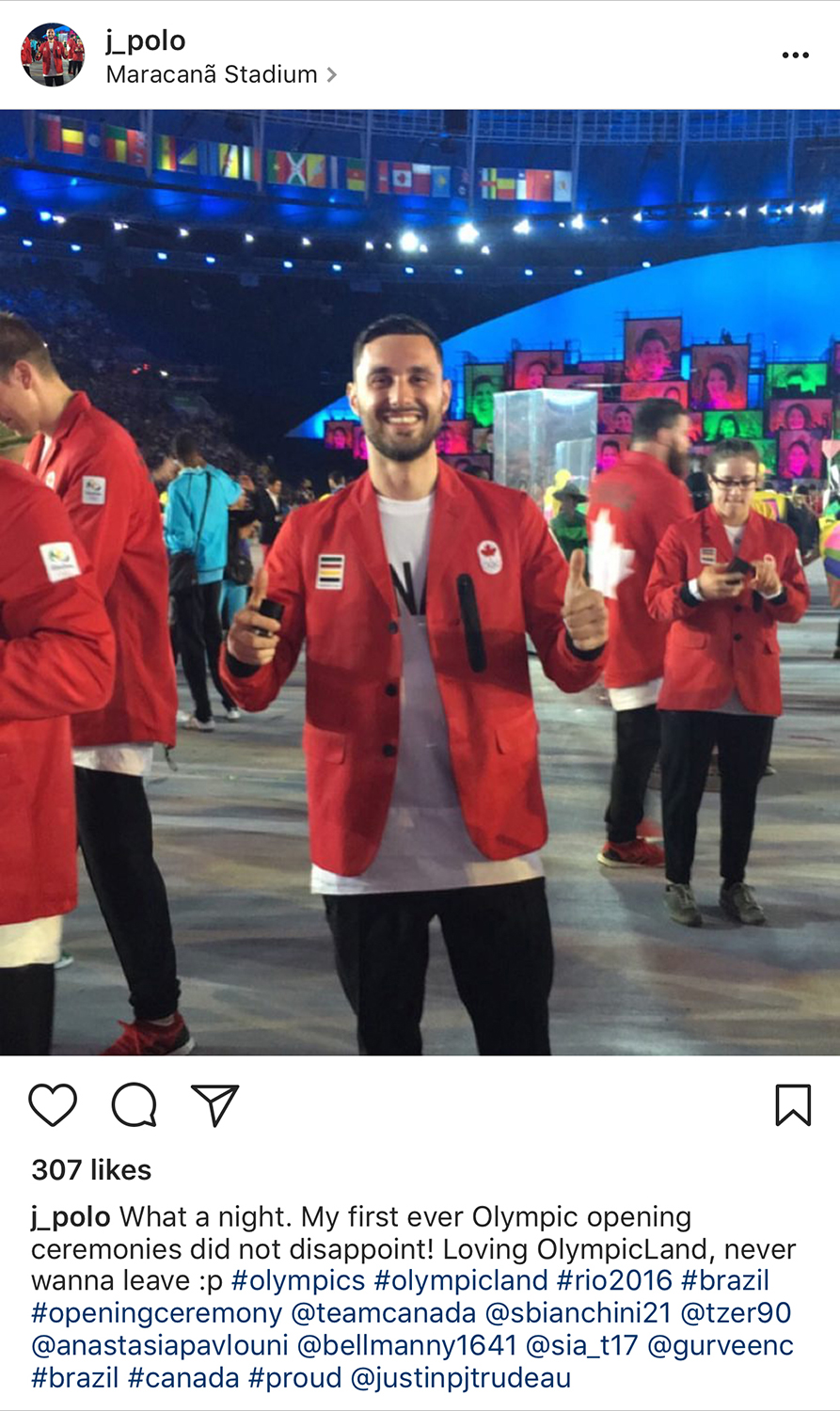 Bell: Can you describe what it’s like to put on a Team Canada uniform and represent your country at the Olympic games?

JP: I was very fortunate to be the first to wear the opening ceremony outfit, because one of my sponsors was Hudson’s Bay. Putting on the uniform was surreal. Then, when I wore it to the opening ceremonies and I got to walk out in front of my parents, friends, family and fans, it was a very emotional moment for me. There were definitely some tears.

Bell: What other hobbies or passions do you have outside of fencing?

JP: I watch a lot of MMA fighting, I’m a fan of self-improvement podcasts, I’m trying to get into other sports like squash, and I also enjoy giving back to younger generations. When you become an Olympian, you have the ability to really help others. It’s something I’m looking to do more of – speaking, mentoring, giving back. Not only are you helping others, but it also motivates you to perform your best when you know someone is looking up to you.

Bell: Do you have any advice for other athletes or young professionals who are balancing work and other life passions?

JP: Always keep your eye on the main prize and have your priorities straight. I don’t believe anything is a sacrifice – there are only decisions. Make your own decisions and stick by them. At the end, no matter what happens, you can’t blame anyone but yourself. Whatever happens, happens, and you can always re-evaluate and try again.