Smart Watches are fast becoming one of the hottest accessories for both gadget and fashion enthusiasts as the latest generation of wearables incorporates more features and power into increasingly appealing designs. To call Samsung’s Gear S smartwatch an “accessory” seems like an understatement for both the tech and style connotations of the word: The Gear S is capable of sending and receiving calls and texts as a stand-alone device (although it still works best as a companion to your Samsung smartphone) and its brilliant 2” curved display makes an unmistakable fashion statement as one of the boldest looking smartwatches on the market.

The most notable feature of the Gear S is its 2” curved Super AMOLED display. The screen itself seems to wrap around your wrist with the help of a simple yet elegant rubber strap accented by a premium platinum-plated clasp. Despite the heavy duty power packed into the water and dust resistant display, the device is surprisingly lightweight. While it’s unlikely you’ll ever forget you’re wearing it, the Gear S never feels like it’s getting in your way whether you’re testing out its fitness tracking capabilities at the gym or keeping up with your notifications at the office. Preloaded and downloadable digital watch faces allow you to easily customize the look of your Gear S home screen. Whether you want the look of an elegant Swiss luxury watch, a functional dashboard to display your data and notifications or a minimalist digital display, the Gear S is quick to adapt. 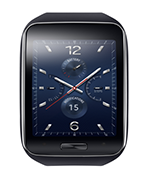 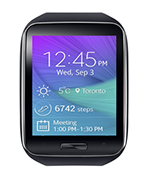 As a companion device, you can expect the Gear S to change the way you interact with your smartphone. Messages and notifications received on the Gear S provide enough detail that you may actually find yourself reaching for your phone less often. I’ve found myself reading texts, social media notifications and the subject lines of less urgent emails directly on the smartwatch and switching to my phone when I need the larger screen and greater functionality to tackle the task at hand.

The Gear S goes beyond notifications as the dedicated Samsung Gear Manager application offers a variety of apps ranging from social media clients, music players, fitness trackers and a fully functional web browser. While I had never used the voice-note capabilities on my smartphone in the past, the convenience and cool-factor of waking my Gear S with a voice command and recording a quick note has allowed me to capture a lot more ideas and tasks that would otherwise get lost in the daily shuffle. (As a nod to the undeniable Sci-Fi feel of the device, I’ve programmed my Gear S to respond to the word “Computer” to make everyday tasks feel like commands on the bridge of Star Trek’s SS Enterprise. Of course you are always free to use a far less nerdy wake word!)

The fitness and health tracking features of the Gear S deserve special mention. Samsung’s S-Health features are built into many of its flagship phones but the Gear S takes these features to the next level with a heart-rate monitor, sleep tracker and even a UV sensor to tell you whether it’s time for more sunscreen. Receiving S-Health reminders to take a walk when I’ve been inactive for an hour feels more natural and effective coming through on the Gear S than buried among the many other notifications on my phone. Support for popular third party apps like Endomondo make the Gear S even more useful as a fitness device by allowing you to track your activity and goals through a broader range of exercises and activities. I’ve now worn the Gear S while jogging and during a yoga class – despite its size, it never felt like it was heavy or in the way.

While the Gear S is the perfect complement to any Samsung smartphone, you can actually use it as a purely stand-alone device on the network with its own unique phone number. With a wireless plan activated on your Gear S, you could still text, call and browse even if you forget your phone at home or don’t want to carry the larger device while you’re out for a jog.  I mentioned before how the device has a Sci-Fi feel and that is never truer than when answering a phone call from your wrist. Calls on the Gear S come through as clearly as speakerphones on top-tier smartphones and add convenience and safety when you’re driving. You can definitely expect to see some jaws drop as many people still associate this type of functionality with the fantastic gadgets in a James Bond film or the even more futuristic Star Trek.

Impressive as it is as an independent device, combining the Gear S with a Galaxy S6, Galaxy Note Edge or other compatible Samsung smartphone adds up to a personal connectivity ecosystem that feels like much more than the sum of its parts. If you are in the market for a smartwatch that pushes the boundaries of what a wearable can do, you will find it hard to top Samsung’s impressive device. The Gear S goes far beyond an accessory for your smartphone or wardrobe becoming an accessory for a healthy and connected lifestyle.

To find out more about the Gear S and Bell’s other smart accessories, visit http://www.bell.ca/Mobility/Products/Samsung-Gear-S-black-Smartwatch.